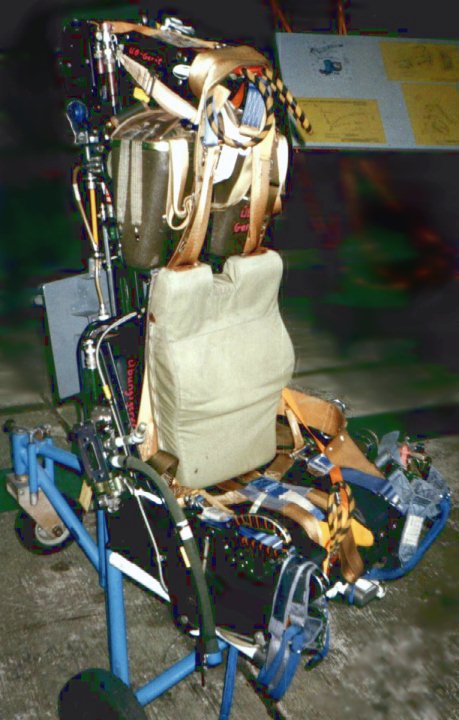 These photos of a Luftwaffe F-4 Phantom II Mk. GH-7(A) Ejection Seat seat come from Mark Verbeek. Unfortunately, the lighting conditions were not ideal as they were taken at a Rheine Hopsten AB Airshow. The seat was displayed in a dark hardened aircraft shelter. The pictures as displayed here were edited to bring up the details, which lead to the washed out colors.

This seat is a variant of the Mk. H-7 which I cover extensively on the following pages:

Therefore, I will only concentrate on the differences in this German version of the seat. This display is interesting in that it includes a small section of aircraft bulkhead with part of the sequencing system attached. This is the grey panel visible near the top of the seat bucket. This seat also has the safety pins attached with the German style yellow tapes connecting them. The red pouch hanging from the tape would hold the pins whens thet are removed.

One of the main changes is the seat bucket, which has a European style survival kit installed, along with the European integral harness. In this case, the harness parts are stowed over the headrest just behind the overhead firing handles. The harness connection box with its gold-colored, round release button is visible in the photo of the left side of the seat bucket on the guard for the inertia reel control handle. The secondary firing handle at the front edge of the seat bucket it a different style from the USAF, USN and British versions.

At the front edge of the left side of the seat bucket there is a green unit, partially hidden by the parachute harness, which is the underseat rocket adjuster. The crew member dials their weight in using a knob at the top of this unit when they enter the cockpit. That adjusts the angle of the underseat rocket to have the line of thrust most directly through the center of gravity of the crew member. Just behind that, protected by a raised plate to prevent the aircrew's leg from interfering with it, there is a black knob which locks or unlocks the inertia reel. This allows the aircrew to lean forward in the seat when it is unlocked, or holds them in place during maneuvering when it is locked.

Visible in the view of the upper right part of the seat just forward of the TRM (with its blue anodized barostat assembly) is a unit unique to the German seat. It is a Valve Sequencing Assembly which is used to arm the seats for sequencing when the canopy is jettisoned. Note the lanyard from the interdictor block is extended to the front portion of the assembly. If the canopy is jettisoned via the canopy jettison handle, this pre-arms the seat to eject immediately when the seat mounted handles are actuated.

The personal recovery parachute box has a anodized metal rim on it, otherwise, most of the rest of the seat mechanisms are the same or very similar to the US versions.