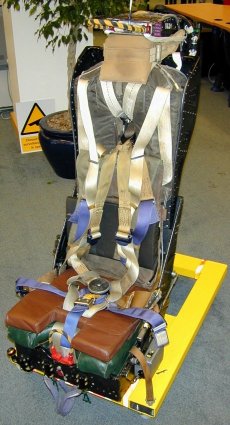 This seat is Seth Cole's second ejection seat. It currently is his chair at his office. He reports that it is "super comfortable!" It is a Sea Vixen Mk. 4DSA seat from Martin Baker. It is one of the few seats ever fitted with an undersea rescue capabily. If the crewman found himself underwater, he could eject, and as part of the seat mechanism a CO2 cartridge on the main beam assembly would inflate bladders under the parachute pack to speed the crewman to the surface. The Personal Survival Pack (PSP) is a Royal Navy soft pack style with a leather seat pad. There is an internal liferaft deployed by pulling a ring on the bottom of the pack. The harness is the Royal Navy style which is longer than the RAF one and goes under the PSP. This retains the PSP to the crewman until after landing.

Seth is in the process of acquiring some of the missing parts, including the PEC, PEC Hoses, Drogue Gun barrel, Drogue Chute, and Guillotine along with some smaller parts, but the seat is in decent condition. The post sticking up from the top of the seat is a pin to prevent the upper handle and face curtain from being deployed.

The stand is a home made one, and the box on it contains a battery to drive the modified seat bucket height adjusting motor.

Thanks to Cole for allowing me to use these photos!