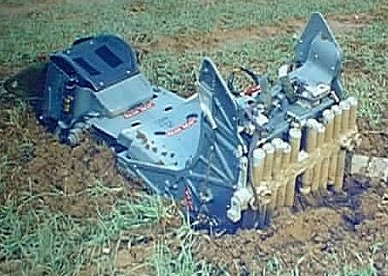 The above seat saved the life of a RAF Tornado F3 Navigator after a mid-air collision. Here is his story:

All was well until Jan 10th 1996 when I cycled in for an early morning sortie. The following account of events is made up from information I have gleamed, witness accounts and the board of enquiry findings, as due to my injuries my last memory prior to the flight was the evening before.

We briefed for a 2v1 combat sortie and launched on time with the 'one' getting airborne first. He proceeded to try and surprise us as we transited. The result was a head-on collision at about 1000 knots closure. We hit wing to wing with my aircraft losing a subtantial part of the right wing and most of the starboard taileron. The aircraft rolled hard right and within one second had exceeded the ADR max roll rate recording of 333 degrees per second. It is thought to be as high as 450 degrees per second as we ejected.

My pilot took us out with the command eject system which the F3 luckily has. I am not aware of my posture but with the such a high roll rate there is a good chance I was thrown against the left side of the aircraft. Certainly my head was not in the headbox of the Martin Baker Mk 10a seat as I left the aircraft at 11,000 ft, 460 kts and 3g. My head was ripped backwards and the helmet pulled from my head, breaking my neck in the progress. At some stage during the ejection I also suffered a head injury with frontal lobe brain damage, a severe shoulder nerve injury and considerable chest trauma. Everything on the seat worked as it should and seat-man separation occured at 10,000'. For the rest of the descent I was unconcious, and remained so for about 8 - 9 days.

Upon landing I was found face down in the mud and attended to by a local man who saw me going over his house at about 200ft. He chased me across the fields in his 4x4 and reached me shortly after landing. He administered enough first aid to keep me alive before being flown to hospital in an RAF Seaking. Although critically injured and expected to die, or at the very least live out my life out ventilated and wheelchair bound (the break in the neck was at the same point as Christopher Reeve) I have made a miraculous recovery and now lead a near normal life teaching aircrew in the F3 simulator as a Civil Servant.

Although I was unlucky to be seriously hurt I think that the fact that all four of us made successful ejections in those circumstances says an awful lot for the Martin Baker seat to which we all owe our lives. The other three returned to flying duties in the RAF.