The picture below clearly shows some features common to the Mk. 5 and early Mk. 7 series seats such as the pack retention straps which are made of cotton strapping, and the main parachute withdrawal line which is routed through the guillitine(yellow covered unit.) For more explanation on how these systems work, check out the Martin-Baker Ejection Details page. 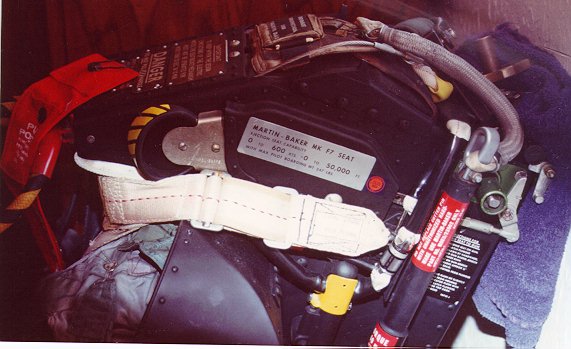 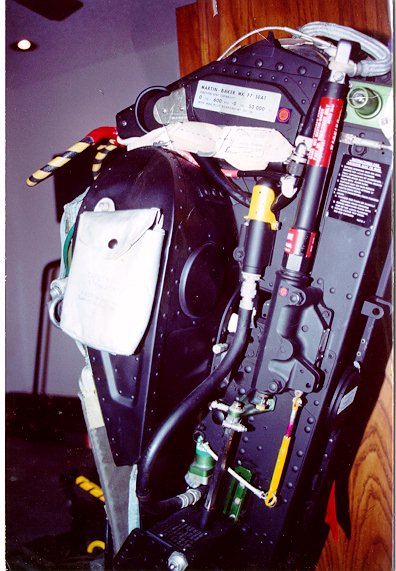 This next shot shows also the drogue gun (tall red-labeled cylinder near the rear)and its associated yellow trip-rod. The green anodized cylinder at the top right of the photo is the top latch mechanism. This is where the crew is supposed to check and make sure the seat is installed correctly. See the aforementioned page for an explanation.

The green sloted item near the middle of the seat is the seat pan guides which the pan rides up and down on to adjust the crewmembers eye-line in the aircraft. Toward the front of this, part of the guillitine gas manifold is also made of green anodized metal. The aluminized fabric pouch is where the seat safety pins are stowed in flight. 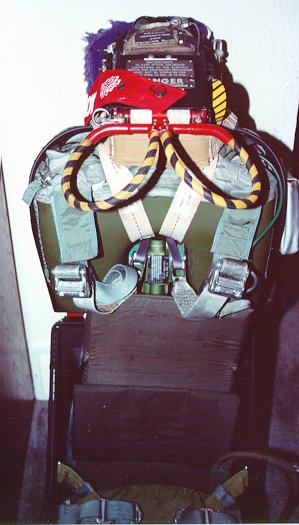 This photo shows the top of the seat to advantage. The double loop handles are the primary initiation handles with the associated face curtain. The second yellow and black striped control to the left side of the headrest (on the right of the photo) is the manual override for the canopy interdictor. On the F-8, if the canopy did not jettison, the pilot could opt to pull this handle, which would fire the seat thru the transparancy. The face curtain would have to be pulled first, then the canopy override. This was not possible on the F-4 Phantom due to the metal frame of the canopy being in the path of the seat. 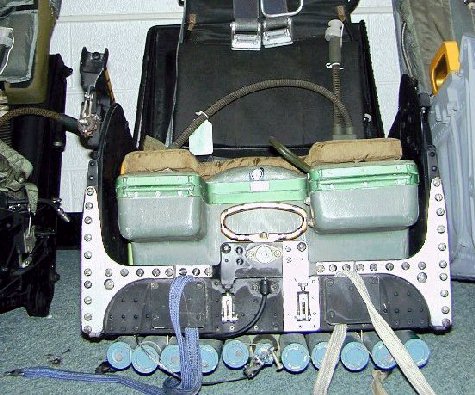 This view shows the seat pan front area to good effect, showing the secondary firing handle, the leg restraint lines and their snubbers, and in particular, the front of the inert underseat rocket. Live rockets are normally painted white, with inert ones painted either completely blue, or at the very least clearly marked INERT. The initiator is visible in the center of the row of rocket tubes with its lanyard leading off to the left. Also shown in this photo is the initiator attached to the manual override handle on the right side of the seat pan (left in photo). The handle pulls the sear out of the initiator directly below it which sends hot gas to the guillitine mechanism on the upper left of the main beam assembly to cut the parachute withdrawal line. The 'U' shaped piece of metal there is the connection between the handle and the sear. Click on the picture for a slightly larger view. 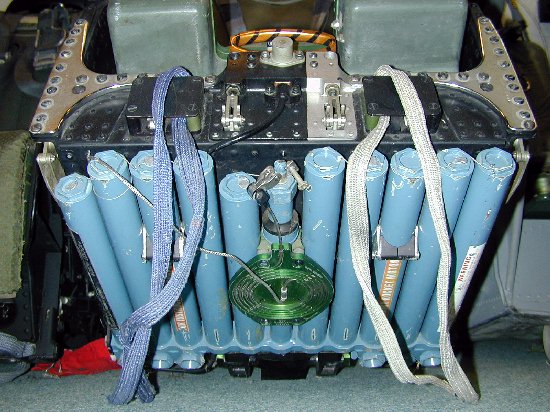 This photo shows the same seat tilted back to show the rocket pack and its initiator lanyard tray. The lanyard is stowed in a spiral tray under the rocket and is attached to the cockpit floor. Some six feet of travel of the seat unspools the lanyard, which then withdraws the sear and fires the rocket. On this seat, the clip end which attaches to the cockpit floor has been drawn up across the front of the rocket tubes and clipped out of the way for handling. This is proper procedure on a live seat as well. The block attached to the sear is attached to the outer edge of the spiral lanyard. When the seat travels up the rails, the cable uncoils, and at full stretch withdraws the sear (click here for a closeup of the lanyard and sear.) On this seat, a bolt has been placed through the safety pin hole in the sear to prevent accidental removal. On the removal of the sear, the firing pin would fall onto the percussion primer of the initator cartridge. This would send hot gas through the initiator tube to the manifold at the rear of the seat. This manifold has attached to it the ten tubes of rocket propellant, four nozzles, and the initiator tube as well as a mechanical attitude adjustment lever. The hot gas pressurizes the manifold and ignites the ten tubes of propellant. Once the pressure reaches optimum, steel disks which seal the exhaust nozzles are forced out and the rocket provides thrust. The rocket thrust is aimed through the expected center of gravity of the seat/man mass. This is adjusted for smaller or larger crewmen by the mechanical attitude adjustment lever (not shown). This interfaces with a slot on the main beam assembly, and when the seat bucket is adjusted up or down, the lever forces the rocket pack to pivot on the two attachment points on either side of the manifold. This aligns the rocket for the best-fit alignment for a person of a specified torso height.

Thanks to Chris Woodul for the pictures of his restored seat. More of Chris's collection is covered on this page.