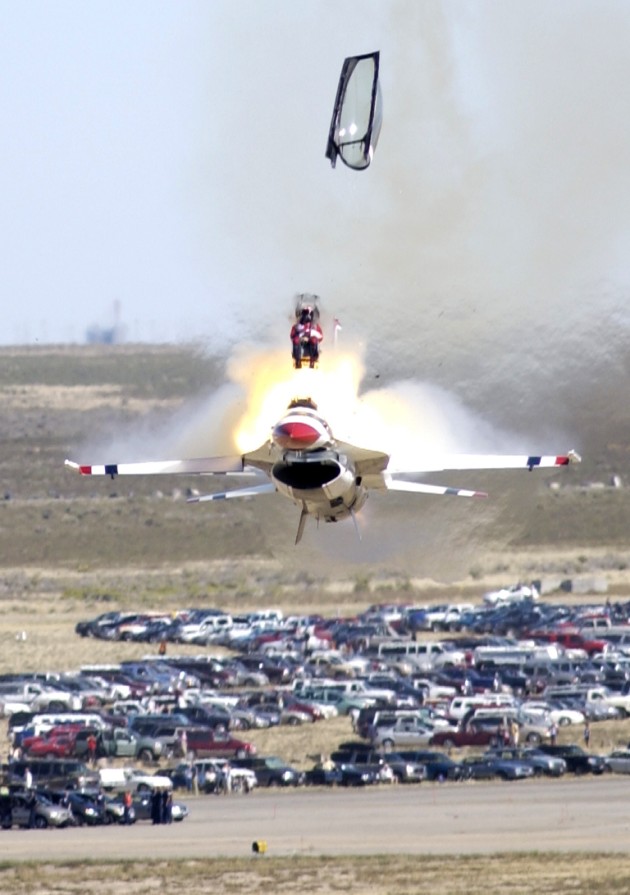 The above photo shows dramatically the ejection of CAPT Chris Stricklin of the Thunderbirds ejecting from the opposing solo, Thunderbird 6 on September 14, 2003 at Mountain Home AFB, Idaho during the "Gunfighter Skies, 2003" airshow. The photo was taken by SSGT Bennie J. Davis III, an Air Force photographer stationed on the observation deck of the control tower. SSGT Davis snapped the shot as he already had realized something was seriously wrong as the F-16 was not lined up on the show line, but instead headed towards the tower. Although it appears from the photo that the plane is threatening the cars in the background, that is an artifact of the long lens used by SSGT Davis. He was using a Nikon D1X with a 300mm lens. The photo was taken at 1/1000 or 1/2000 of a second. The cars are actually about a half mile behind where the aircraft impacted the ground.

CAPT. Stricklin had taken off into a maneuver called a Reverse Half Cuban Eight. He pulled up into a sharp climb, rolled inverted, and then pulled over the top into a partial loop. Unfortunately he based his safety calculations on an incorrect field altitude, and was unable to safely end the maneuver. On realizing the aircraft was unrecoverable he turned the aircraft slightly away from the show line, and then ejected. He initiated ejection with his left hand at 140ft of altitude, with a descent rate of about 8400 feet per minute. His airspeed was about 225kts which is about 260 miles per hour. Technically this was probably an out of envelope ejection due to the high descent rate and low altitude.

Upon actuation the initiators on the seat sent hot gas out to the canopy jettison system. The canopy was released and rockets ignited pushing it up and back to where the airflow helped tear it off the jet as it reached the point where the hinges release. After the canopy had moved about ten feet away from the jet a pair of lanyards attached to the canopy caused the egress system to continue its sequence by having hot gas directed back into the seat via another hose on the other side. This gas initiated the catapult. This is a ballistic charge, akin to a large shotgun shell that drove the rocket section of the ROCAT and pushed the seat up the seat track assembly until the point where a port was unmasked allowing hot gas to enter the rocket section and ignite it. The rocket then continued driving the seat up the rails and out of the cockpit. This took some time, perhaps about four tenths of a second, during which time the aircraft continued to descend. The seat left the aircraft at somewhere around 50-75 feet of altitude above the ground. 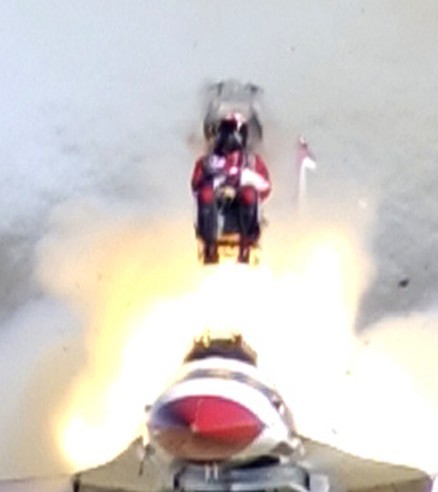 CAPT Stricklin suffered only minor injuries due to the ejection. The aircraft was destroyed. Analyzing the photo gives some interesting insight into the ACES II ejection sequence. The following photo is a blow up of the center of the photo. It shows the seat atop the flame from the three rockets of the seat, the CKU-5 Rocket Catapult (main propulsion), the STAPAC (STAbiliztion PACkage, keeps the seat from pitching excessively), and the Yaw rocket. The seat appears to be no more than four feet above the cockpit rails, and is already clearly yawed slightly to the left. This is to help clear the vertical tail. The blur over the pilot's helmet is the parachute box that has just been mortared off the seat. The mortar fires at 0.2 seconds after seat sequencer is activated by a striker near the top of the cockpit rails (seat track assembly). This indicates that the photo was taken only a few hundredths of a second after that time period. The headbox shape is pretty clearly visible with the pitot tubes protruding on either side of the top, and the flaps on the bottom are slightly spread as the parachute shroud lines are begining to be extracted from the stowaged tunnels on the inside of the flaps. The white blur above the left knee appears to be notes or maps blown loose by the relative wind. CAPT Stricklin's body position is nearly optimal for the ejection, even though analysis of the downlinked video from in the cockpit shows that he initiated ejection with his left hand while his right was still on the Flight Control Stick. As the canopy jettisoned he moved his right hand to the seat firing handle.

Other images show the aircraft sliding on the ground as seat separation occurs. This would be about 0.45 seconds after sequencer start, hence if CAPT Stricklin had delayed even a half second, he would likely not have survived the mishap. The Goodrich ACES II seat worked exactly as expected, and saved the pilot in a situation that would have been fatal for any earlier generation seat. The mortared parachute allowed for the pilot to have a fully deployed parachute which decellerated him to a safe landing speed despite the low altitude and high sink rate of the ejection. The seat selected Mode 1 based on the pressure of the relative wind as measured by the pitot tubes on each side of the headrest compared to the ambient pressure from the Environmental Sensor Unit (ESU) on the back of the seat. In this mode the sequencer orders the parachute deployment nearly immediately, allowing for exceptionally fast recovery of the airman.

The above images are frames from an official USAF video downlinked from his aircraft during the last seconds of the flight. Click on the image to view a WMV of the last five seconds of flight.