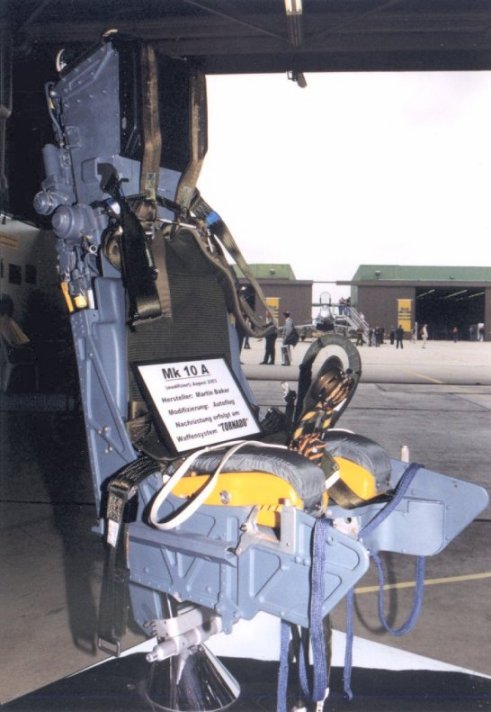 These photos of a modified Tornado Martin Baker Aircraft Mk. 10A ejection seat come from Mark Verbeek. He took them at an airshow. The seat shows several unusual modifications performed by the German company Autoflug GMBH. Autoflug does rework of German ejection seats for their military. They have been in the ejection seat business since at least the days of the F-104 Starfighter.

Unfortunately he was unable to get a technical description of the modifications. For reference, I recommend you compare these photos with photos of an unmodified Mk. 10A also provided by Mark. Clearly visible in these pictures are a modified version of the time-release mechanism that now uses a gas system to release the new drogue shackle retention mechanism. This replaces the Martin-Baker scissor shackle. This seat is also directly gas-initiated instead of the Mk. 10A mechanically-fired mechanism. To do the modifications, Autoflug had to replace the top crossbeam from the main beam assembly with one of their own design. It incorporates the integral drogue shackle retention mechanism. This seat also deletes the air cooling system often used in the headrest of Mk. 10 seats.