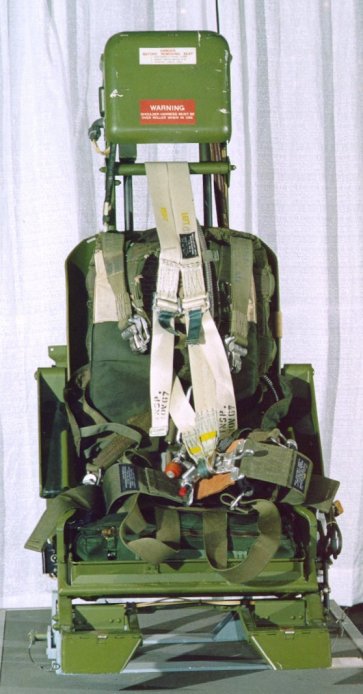 This seat is an example of a 1st Generation ejection seat. This seat used a gun catapult system and originally used manual lap belts although it may have been fitted with gas operated ones later in service. The seat has a clear resemblance to the later T-33 seat, however the short seat pan and small handle loops for seat initiation clearly mark this as an earlier version.

The P-80 (also known as the F-80 after designations were changed) was one of the first jets to be in service with ejection seats. The P-84 was equipped with the first US production seat.

This seat is equipped with a gas-operated lap belt although there is no evidence in terms of gas lines or initiators to indicate that this is original to the seat. The small foot rests are another indication of the smallness of the seat. Note the offset mounted inertia reel and the shoulder belts looped over the bar. No seat separator was fitted to this seat indicating that the seat separation was totally manual.

In the picture block below there are several more photos of this seat, and two of a later version of the same type of seat. The later version shows some differences in that the firing handle on the right side is a later large loop version, however the left side handle is hidden or missing. Provisions for oxygen and anti-G suit connections have also been added to the left side.