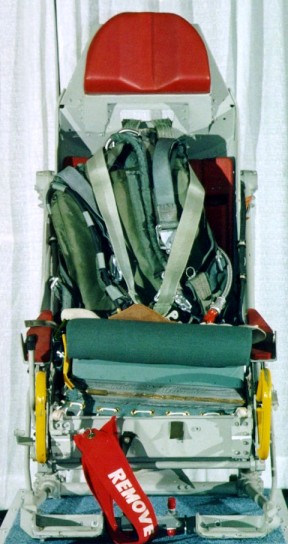 This seat is an example of a 1st Generation ejection seat. This seat used a gun catapult system and originally used manual lap belts although it may have been fitted with gas operated ones later in service.

It is fitted with a parachute equipped with a 'Golden-Key' system for auto activation at seat separation. This key was connected to the lap belt to automatically pull a lanyard for the automatic activation device in the parachute. This typically had a 2 second delay although other timings were possible. This delay was inhibited by a barostat if above 10,000 feet. At 10,000 ft or below the timer would run and the parachute would deploy. The delay was mainly to allow for the seat to separate some distance to prevent entanglement with the man or parachute.

The large yellow firing handles can be interesting to contrast with the earlier handles on the P-80 or P-84 seats. Clearly it was felt that the airman needed a more visible and more easily grasped handle during emergency situations. The armrests on this seat still exist, and are still raised during firing, however they have clearly shrunk from earlier seat designs like the F-86 seat.

The seat positioning assembly is also of note. The large frame allowed for the seat to move in a direction that placed the smaller crewmen more forward in the cockpit, as well as more elevated. This made reaching the instruments and controls easier than the cases where the seat moves more in a vertical plane. Raising the right armrest would activate a mechanism to release the seat bucket and allow it to bottom before firing. This would limit the risk of the aircrews impacting the instrument panel or canopy bow during the ejection process.