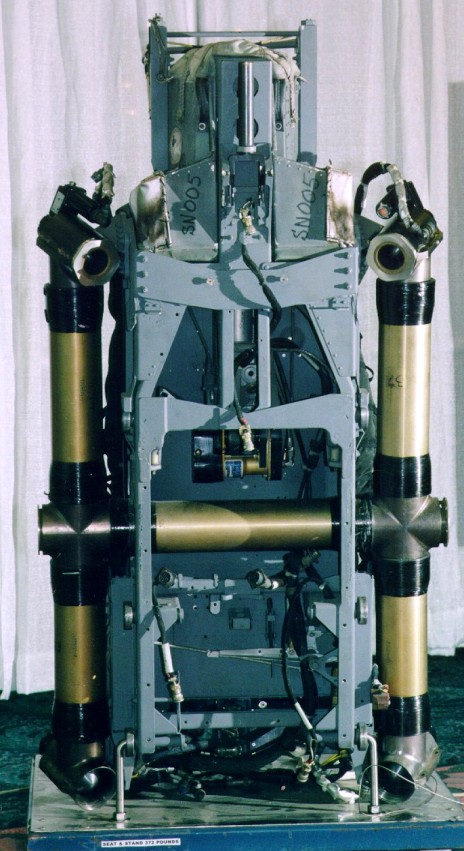 The 4th Generation Ejection seat was developed as a technology demonstrator program to showcase some of the technologies developed for the CREST Seat. By having a sled test demonstration of the propulsion, flight control, and windblast concepts this seat would validate the capabilities for future projects. With AERO, Aerojet Propulsion Systems, McDonnell-Douglas Aircraft (a subsidiary of Boeing Aircraft), and F&L Enterprises the USAF and USN developed and tested the seat. The key features of this seat included positive limb restraints, a brow device, and a pintle-controlled rocket engine. Using an F-16 ACES II as the base chassis, the large 'H'-shaped rocket was installed in the back as can be seen in the picture to the left. This rocket consists of five tubes containing propellant and four nozzles located at the ends of the tubes, two at the top and two at the bottom. Unlike previous ejection seat propulsion systems these nozzles have the ability to control the thrust from each nozzle. This is accomplished by use of Aerojet-developed pintle nozzles which can vary the amount of thrust from each nozzle. A control system working off feedback sensors on the rocket with inputs from an inertial navigation unit mounted in the seat pan controlled opening and closing the nozzles. These nozzles were each tilted in a downward and inward direction, allowing the seat to be controlled in pitch, roll, and yaw based on differential thrust. Doing this allowed the seat to control motion to counter wind forces and inertial movement. Ground avoidance was also programmed and tested.

In a dramatic series of tests the 4th Generation seat was tested from zero-airspeed through 700 KEAS at the sled test facility at Holloman Air Force Base. Although there were some problems with the tests, the technology performed very well. This photo shows an early zero airspeed test. The seat has catapulted from the cockpit and the rocket has pitched the seat to a 45 degree angle for maximum effective trajectory. The seat was shown to be capable of righting itself from a 60 degree roll at speeds from 0 to 320 KEAS and climbing for altitude before seat separation. At lower speeds seat separation was also assisted by the pintle rocket system. Just prior to rocket burn-out the seat was commanded to pitch to have the lower end facing into the relative wind. With the ACES II parachute mortar system designed to deploy the parachute upwards from the seat, this position allowed for a very clean deployment and seat strip-off during separation.

At higher speeds, the seat would control attitude to prevent injury, and just prior to rocket burn-out would pitch into the best position for drogue deployment. After deployment of the drogue, the seat would be slowed by the drogue until seat separation which would occur in the same manner as a normal ACES II seat.

The arm nets and leg restraint system of the 4th Generation demonstrator were preset in the deployed position as was the intertia reel in the retracted position. Since the demonstrator was mainly proving the controlled thrust, it was felt that the additional complications of developing these mechanisms concurrently were best avoided. The arm nets and leg restraints worked well. Another mechanism unique to the seat was the head brim. This device mounted on the headrest was designed to serve two functions. First, it was designed to provide aerodynamic isolation from the airflow over the aircrew's helmet. Second, using a set of lines from the front edge of the extension down to the shoulder section of the aircrew harness it provided resistance to sideward movement of the aircrew's head. The aerodynamic isolation was used to prevent the effect of the relative wind providing a lifting force on the airman's helmet that would be transmitted to his/her neck. At seat/man separation, the brim was automatically retracted.

Although the CREST and 4th Generation programs have been closed, the CREST office is still open and developing further advances in seat design.