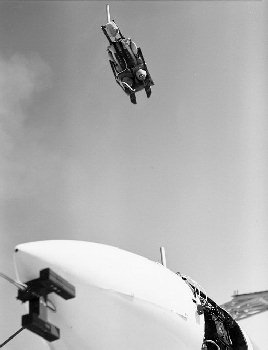 In its history, NASA has pioneered major flight developments, from breaking the sound barrier to lifting bodys to sweep wing aircraft to hypersonic flight. Almost from the beginning, the experimental aircraft were equipped with ejection seats. The Northrop X-4 was the first one to be equipped with a rudimentary ejection seat. The seat was an early first generation design, which meant that the primary design consideration was to get the pilot clear of the aircraft, after which he was to manually seperate from the seat and deploy his parachute. This photo shows the seat after being removed from the X-4 for installation in the X-1E in 1954. This photo is particularly interesting because of the crude test dummy (which shows the 'road rash' of previous tests on its face). Acceleration tests (or +Gz tests) at the time was done with a test tower and an accelerometer on a set of weights. Later, anthropomorphic dummys such as the ADAM were developed to provide more telemetry about the different forces experienced by an ejecting pilot. In the mean time, the dummys job was to prove the pilot would clear the aircraft without having any portion of its anatomy coming into contact with the cockpit fixtures. The seat and dummy would simply crash back to earth with some force as this post-test photo shows.

In the 1955 photo shown above the X-1A seat is visable after being fired by its catapult gun. This kind of test was to make sure that the seat with the dead weight of the pilot dummy and the seat would reach sufficient altitude quickly enough to clear the tail of the aircraft at the design speed. The photo clearly shows the extended catapult tube from the cockpit, while the seat barrel has rotated up behind the headrest attatchment point.

The Bell X-1B used a seat of similar design, albeit markedly different appearance. The armrests/firing levers have apparently been removed for maintainence in this later photo.

Thanks to Tony Landis and NASA for providing the pictures and diagrams on this page.