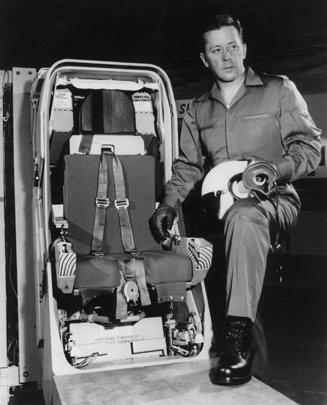 The XB-70 Valkyrie Bomber by North American Aviation/Rockwell was equipped with an escape capsule for each of the two man crew. Al White, a NAA test pilot shown above, was saved by one of the capsules during the infamous mid-air collision mishap. The capsule, which is similar in concept to the B-58 Escape Capsule, contains survival gear, oxygen systems and the flight control stick. This system allowed for the aircrew to encapsulate by the pulling of a handle, which would retract the seat and the aircrew's limbs, then the upper and lower clamshells would close. The capsule would then pressurize and allow the aircrew to fly the aircraft down to a lower altitude before they opened the clamshell.

In case of a major aircraft malfunction requiring ejection, a trigger on either handrest could be squeezed to initiate ejection. The capsule would then be catapulted out of the aircraft. On exit it would deploy a set of booms for stability, as a sustainer rocket propelled it away from the aircraft. Seconds later the main recovery parachute would be deployed, followed by an inpact attenuation airbag located under the capsule.