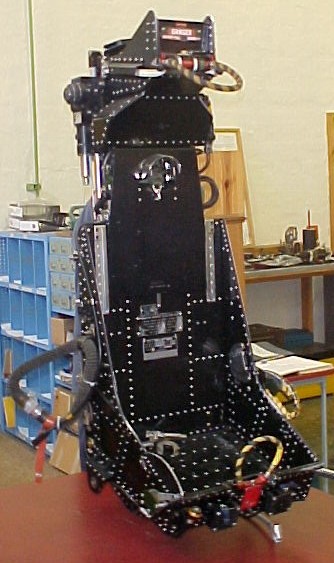 This seat is used in the Aeromacci 326K Impala II aircraft by the South Africa Air Force. This seat is in service there and is undergoing a 360 day maintainance cycle. Note the Time Release Mechanism/Unit (TRM) is not cocked in this photo. None of the 'software' like the parachute, survival kit, or harness is installed, nor is the underseat rocket. The seat is somewhat unique in that it does not use the typical Martin-Baker Personal Equipment Connector for the pilot services.

As part of the 360 day cycle many of the subassemblies will be removed, inspected and lubricated. This photo shows many of the assemblies and the maintainance guide. Some assemblies include the remote rocket initiator to the top left, serveral initiator firing mechansisms to the right of that, the 'U'-shaped catapult initiator retainer, the top latch spring and top latch plunger, the catapult initiator, and the TRM. Below that the second row includes a new firing handle, a bracket, the drogue gun barrel/slug assembly, the guillitine, and the drogue gun mechanism.