HomeBuilt Sim featuring F-100 Ejection Seat
Starting at age five, I used to construct cockpit 'forts' out of cardboard and any electronic thing I could dig out of local dumpsters. As I got older, and my knowledge grew, I elevated into wood, metal, and more elaborate electronic circuits. At 31 I still haven't grown up and continue to build increasingly elaborate cockpits. Now, thanks to the internet, I have managed to track down affordable REAL avionics and aircraft hardware making my latest project more realistic than ever. Computer technology today now makes a fully interactive flight experience possible with amazing flight sim software and hardware interfaces like the EPIC card to tie the computer to the outside world. My current project is built around whatever affordable aircraft items I could find and is not meant to represent any specific aircraft. Parts like real F16 throttle and control grips, HSI out of an A10 Thunderbolt, and fuel indicator from an F18 Hornet make it a truly eclectic bag of stuff. Figuring out how to get the instruments to work has taken the longest time. Sometimes manufacturers will send technical data about their products, as was the case with the HSI, but in most cases I have to trace wiring from connector pins to servos and such. The REAL challenge will be to get flight sim software to talk to the purely analog gauges!

The pictures below depict the process of restoring and integrating the F-100 ejection seat into the simulator. 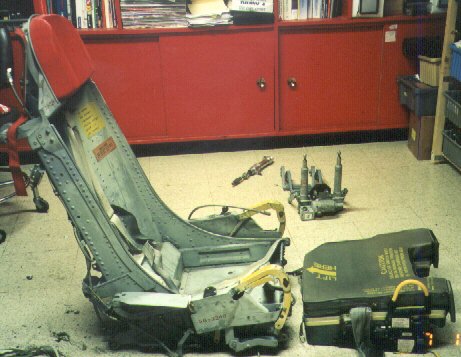 This picture shows the F-100 seat as it arrived from Mojave, CA. It was dirty, but serviceable. The seat pack/survival kit to the right of the seat is a CNU/111P from a Martin Baker F4 Phantom ejection seat. Miraculously , it fit perfectly into the pan of the F-100 seat. I will install a large subwoofer in the F4 seat pack to enhance the simulation experience. In the background you can see the 28VDC two arm seat actuator motor. I had to rebuild it to get it to work, but the result as an actuator with a 600lb lift and push capacity. It could easily lift the 85lb seat and me times three! 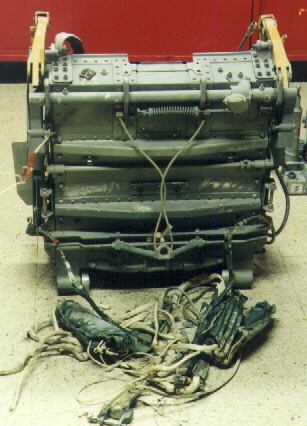 The picture on the left shows the bottom of the F-100 seat with several bundles of old rope removed. These bundles were packed behind a retention assembly that was designed to release during the ejection process. Steel cables attached to one end of the rope assembly were affixed to the airframe. Upon ejection, the anchored ropes were pulled through a series of spools that provided enough friction to help stabilize the seat as it ejected off of its track and away from the aircraft. This was part of the DART system intended to reduce tumbling during ejection. At least that's what the decals revealed. There were metal foot rests that hung down from the tube seen at the top of the seat (I removed them.) The spring leading to the round apparatus on the right locked the eject handles in the up position when pulled. A metal flap to the right and behind that apparatus is pulled to release the lock and return the handles to their lowered position. 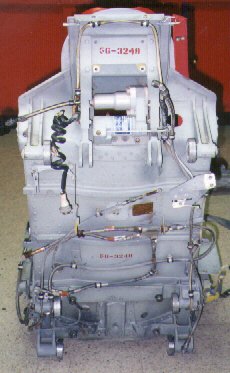 The rear of the F-100 seat consists of a variety of high pressure lines designed to carry hot discharge gasses to various assemblies during the ejection process. One destination for the pressure lines was the shoulder harness roller assembly which locked upon ejection. The hanging coiled electric cord was connected to the seat actuator assembly that attached to the chair via the two lift points to the right of it. The rollers on each side revealed the seat was designed to rest solely on tracks that it slid onto in the cockpit. The data plate told me that North American Rockwell built the chair in 1956 for F-100 #56-3248. The electric switch used for raising and lowering the seat is located on the left arm rest and the electric wires to the actuator traveled up the back of the seat on the right. 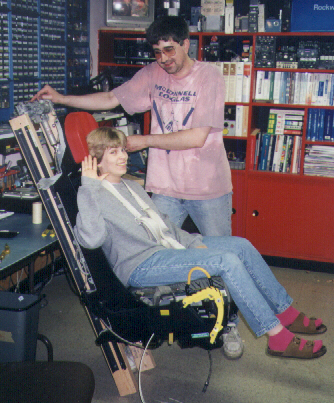 After making the electric seat actuator operable, I constructed a seat track frame out of 2x4s and metal brackets. The tracks themselves were simply steel 'L' brackets affixed to the wooden frame. The actuator rests on top of the frame and is able to lift and lower the chair about 6 inches. To check the motor, I enlisted the help of my wife Janet who, after a little coaxing, agreed to be the chair's first guinea pig. The actuator had no trouble lifting her and the seat. Once the frame was mounted in the simulator, it had no trouble lifting me either. With a load capacity of 600lbs the actuator motor soaked up almost 20 AMPS of 28VDC power, so I had to construct a special bank of eight 3 amp transformers and rectifiers to power it. 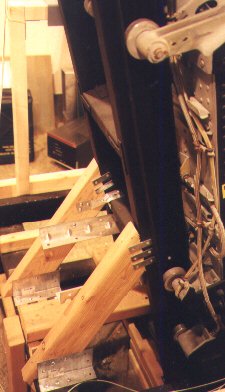 The next challenge was to mount the seat and track frame in the simulator frame. I had to get the frame height just right to make sure the seat bottom rested on the floorboards and the angle right so the seat pan was level with the frame. Also, it was essential to center it correctly since I had to build control panel consoles to the left and right of the seat. I anchored the seat track frame at numerous places onto the simulator frame since I wasn't sure where all the stress points were. I figured overbuilding this part was important since I didn't know who would sit in the seat in the future and how heavy they might be. When finished I was pleased to find the seat didn't 'wobble' in its tracks and the motion up and down was smooth. When making the consoles on either side of the seat I had to be sure to allow enough room to easily grasp around the ejection handles and release trigger. 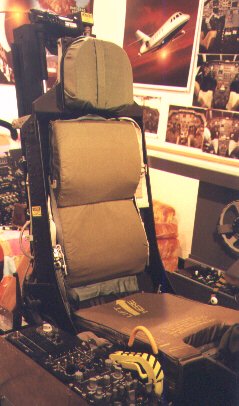 Here's a front shot of the F100 seat in the sim. The back cushions were two "Personnel Lowering Devices" that were obvioulsy out of some ejection system since they were designed with an integral cushion along with the bundled nylon cords. 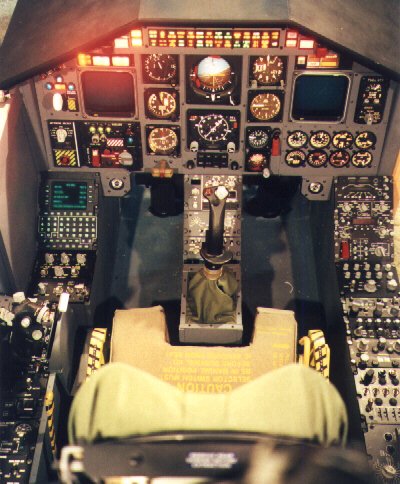 With the seat in place, I adjusted the depth of the rudder pedals so that I was comfortable. I'm 6ft tall and didn't want my knees in my chest so I put them further back than they really would be in an actual aircraft. I placed the throttle and control assemblies around the seat in places where they were comfortable and unobstructed. The console to the right contains the radio communication and navigation equipment such as HF, V/UHF, TACAN, ADF, IFF , ICS and secure voice crypto controls. Behind the throttle quadrant on the left contains the engine start panel, oxygen regulator, autopilot engage and trim panel, and air conditioning panel. The front panel contains the typical flight, navigation and engine instruments. The two circular objects protruding on the corner of the leg wells are typical air vent nipples common in airliners. 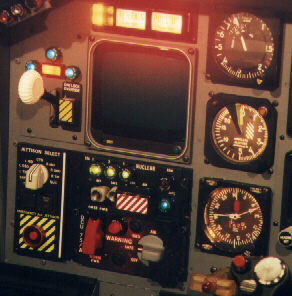 The left hand of the front panel contains the following: 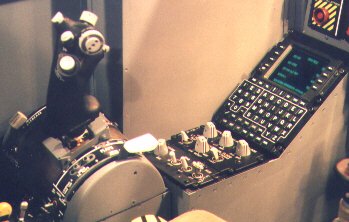 This picture depicts an authentic F-16 throttle grip mounted to an F-105 throttle quadrant. The mechanics of the quadrant provides for an excellent feel even though the F-16 grip is mounted vertically as opposed to horizontally as it is was meant to. The quadrant also has a built in flap lever which was very convenient. In front of the quadrant is the interior and exterior lighting panels and in front of that is the flight management system control/display unit. Like all other aircraft panels, the control/display unit employs backlighting to illuminate all lettering. This panel was designed to illuminate lettering with night-vision compatible green. 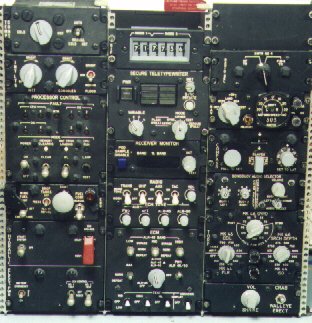 While it will be a while before I get to this point, the panels on the right will be mounted above the ejection seat in a slidable shell-type roof. Just like the panels in the side consoles, these are all 5.75" wide and interchangeable. The twist lock dzus fittings on the panel corners make shuffling panels a breeze and I won't know for some time where I will permanently have all panels arranged. Some of the panels here control such things as electronic countermeasures, fuel dump, compass setting, sonorbuoy audio monitoring, torpedo drop, shrike and walleye volume and many other things. The dzus rails the panels are mounted on came from a salvaged overhead panel. Construction tips No matter what source you acquire military surplus aircraft parts from, EXPECT TO SPEND SERIOUS TIME AND EFFORT RESTORING EACH PIECE! Unless the surplus is new or unused, you can expect to change or paint knobs, clean/touch-up edge-lit panels, and remove dirt from everything else. If you intend to get instruments operational, you'll need a DC to 400Hz inverter to power them. Instrument servos won't budge with the typical 60Hz power in your home. Krylon Flat Gray multi-purpose primer is a good match for flat instrument panel gray. For color consistency, be sure to buy only cans from the same lot since primer is not carefully color-matched between lots. Above all - take your time. You'll probably change the layout of your panels a dozen times as I have whenever a great new part is found. UPDATE- 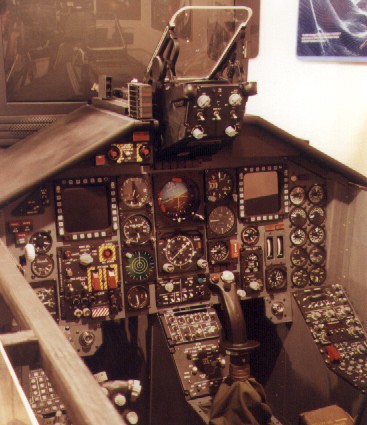 In the year since this was written, Matt has not been idle. He has acquired many new parts, reverse engineered them and installed several new ones. The sim is now outfitted with a 35inch monitor and has been tested, prior to it being shut down again for yet more modifications. The MFDs are from F-16s and the HUD is from an A-7. 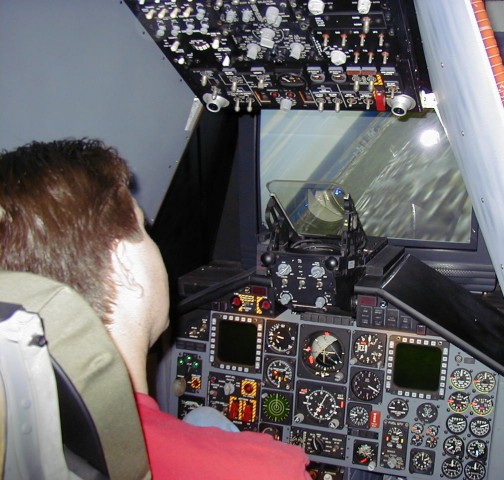 Matt's work finally begins to pay off, as seen in these photos of the simulator in action. The A-7 HUD is now active and slaved to the computer via the EPIC card as are several of the instruments. The most obvious of which is the Attitude Direction Indicator (ADI) which is the round ball in the center. The ADI is colored to represent the sky (grey) and the ground (black) and tilts to show the angle of bank of the aircraft. The picture clearly shows the horizons matching. 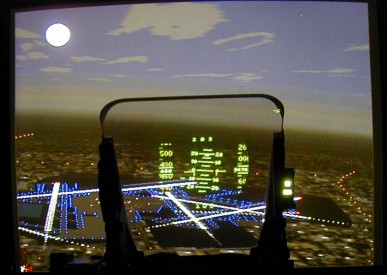 In Matt's words, here is the state of the machine: "! The throttles, rudder pedals, control stick, gear lever and engine start/fuel cutoff switches are all interfaced to the computer via the EPIC card. The HUD is now fully operational and provides real-time lag-free data directly on the HUD glass. The primary instruments such as the ADI, Altimeter, IAS, V/S, and HSI are all operational! Instruments accurately track data shown in the HUD! Improvements are being made to all systems as development continues."


This page has been accessed