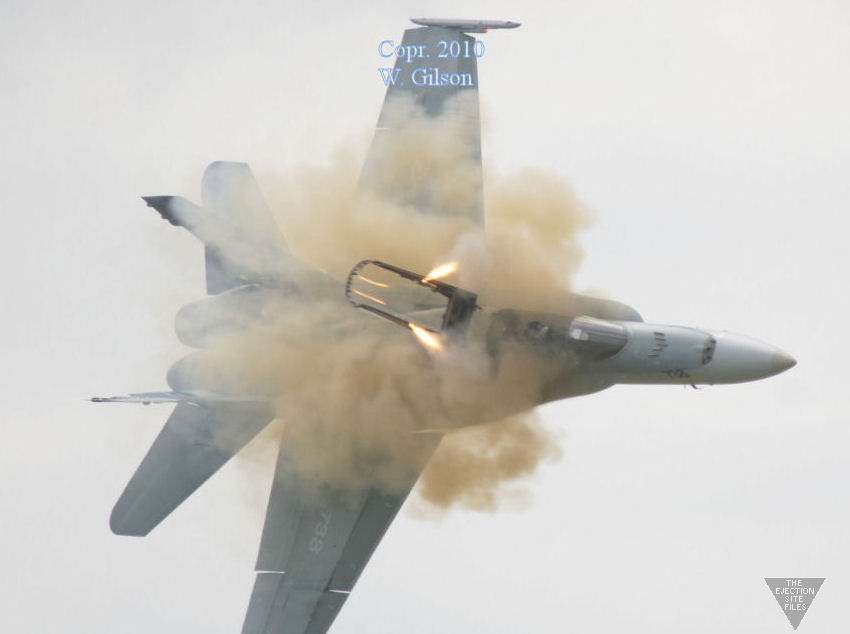 These photos show dramatically the ejection of CAPT Brian Bews from a CF-18 during a practice flight for the Lethbridge International Airshow in 2010. Unlike the other famous photos of this ejection, these show very clearly the canopy jettison, above, and the seat/aircraft separation occurring in the following photo. 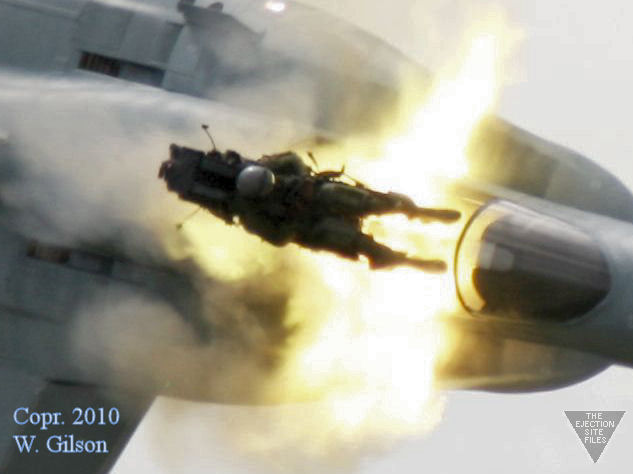 The body 'slump' position is an unfortunate side-effect of the rapid acceleration of the seat catapult and rockets firing. This can lead to back injuries, and indeed CAPT Bews suffered some injuries during the ejection. The photo has great detail and also shows CAPT Bews arm and hand position on the firing handle. Also visable on either side of the headrest are the two pitot tubes extended at about a fourty-five degree angle to sample the airflow pressure striking the seat as it enters the airflow outside of the cockpit. These pitot tubes send data to the digital sequencer on the SJU-17 ejection seat. This data is interpreted by comparison with a static sensor elsewhere on the seat. This comparison yields an airspeed that the sequencer uses along with the raw data from the static sensor to determine the sequence of actions the seat needs to acomplish to recover the pilot in the safest manner.

The sequencer has four primary modes. In this case Mode 1 would be selected as the airspeed was low, and the altitude (determined by the static pressure), was also low. The seat would then immediately deploy the main recovery parachute. The seat would also release the leg restraints, survival kit, and inertia reel straps thus allowing the parachute to extract the pilot from the seat. The seat itself will fall to the ground unsupported by any parachute or other decceleration device.

The above images are from William Gibson, an aviation photographer. His web site at www.aerophotointernational.com has more photos of the short flight of this CF-18.