Touring an A-12 Blackbird Cockpit 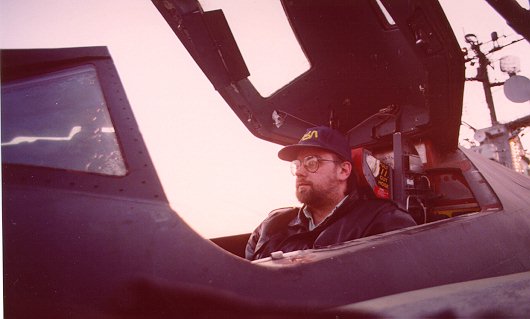 The stick is locked up due to lack of hydraulic pressure. The rudder pedals move as do the throttles. The levers have different sized grips and it wasn't easy to lift both over the a/b stop simultaniously. Since I have studied the SR-71 Pilot manual I knew most of what was there, but many of the controls were from flight test, and some were pre-DAFICs so I was intregued by many of them. The instrument panel (IP) of every A-12 was probably slightly different, and this was no exception. It has aspects of the SR-71 panel that I have not seen before on an A-12. The center instrument holes were cut for the larger ADI and HSI that are standard on the SR-71 for example. There are controls squirreled away almost everywhere in the pit. Forward and above the throttle there is a little drum with left/right levers that I have no idea what it does. It can be seen in this picture of the left console. Possibly spike position or bypass position, although there are controls for that elsewhere. This is article 122 (the second A-12 built) so it was weird to see the late style IP. The compass card, I'm told, was last updated in 1967, and the A-12s were officially shut down in '68 so this was one of the last flying probably.

One main difference between the SR-71 and A-12 is the drift sight on the top of the IP. This is used by the RSO in the SR-71 to track position over ground. The U-2 also has one in the pilots face since there is no aft seater. Just above the drift sight and under the top of the glare sheild is a row of warning lights that are invisible except if you are at the right height. I had to stand up partway to see them since the seat is full down. Both side consoles are missing panels. On the right, I see that the SAS/AUTOPILOT panel is missing, along with other unknowns. The left is missing a radio control. One of the most intact portions of the cockpit was the center console which had all the caution lights, and some switches. The right auxillary panel is pretty intact, as is the left one.

The seat itself is a C-2 variant which has a few differences from the F-104 version. The main one is the deletion of the arm nets, and another is the holes in the seat pan, one of which near the left kidney area is used for the pressure suit vent hose.

The seat is currently filled with a F-105 survival kit, and a few pieces of padding that make it more comfortable to sit in. The headrest was also repaired as it had deteriorated.